Come along for a jaunt around New Orleans, as we visit some great nightclubs and tune in to some live local music. Celebrate 25 years of the legendary Tipitina’s, an Uptown institution that showcased homegrown talent like Professor Longhair, James Booker, Dr. John, and the Neville Brothers. Then head over to Donna’s Bar & Grille in the French Quarter, where clarinetist Evan Christopher and piano player Tom McDermott are making waves with their unique blend of New Orleans, Caribbean and classical music. Plus a recipe for classic New Orleans cocktail, the Sazerac, and music for late night parties and hangover mornings.

For richer, for poorer, in sickness and in health — June is the month for weddings, and American Routes has lots of different takes on matrimony from Cab Calloway, Tammy Wynette, Hank Williams, Etta James and more. Plus a sweet proposal and a look at what makes a good wedding band — the music, not the gold. Tune in to American Routes, and we’ll get you to the chapel on time…

Head West out of New Orleans and through Texas to the great Southwest. Hear music from the arid desert landscapes of Arizona and New Mexico, and listen to conversations with musicians from the area. Guitarist Duane Eddy helped invent surf music from his homebase of Phoenix — hundreds of miles from any beach — and the Tucson band Calexico mold indie-rock styles with Mariachi music. Also writer and musicologist Jack Loeffler describes the sound of the Southwest from his home in Santa Fe. 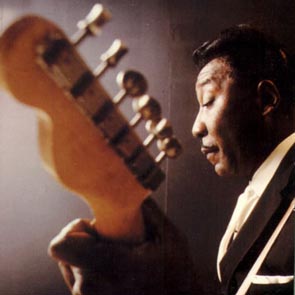 DAMN RIGHT... MUDDY AND BUDDY GOT THE BLUES!

2003 has been designated by Congress as the “Year of the Blues,” and American Routes focuses on two of the genre’s heavyweights: the late Muddy Waters, from Rolling Fork, MS, and the very much alive Buddy Guy, formerly of Baton Rouge, LA. First, a portrait of Muddy from his band members James Cotton, Willie Smith and Bob Margolin, with biographer Robert Gordon. Then Buddy Guy, who played guitar with Waters as a young rising star on the influential 1964 LP “Muddy Waters: Folk Singer,” and who has been regarded as one of finest players of electric city blues for years. We’ll talk with Guy about his extraordinary life, his most recent CD “Blues Singer,” an acoustic tribute to the ’64 Muddy album, and his present-day Chicago nightclub devoted to the blues.